Home » Blog » Copper or PEX Plumbing – Which is Best for Your Oceanside, CA Home?

Copper or PEX Plumbing – Which is Best for Your Oceanside, CA Home? 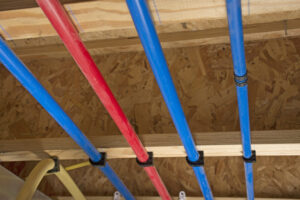 Up until recently, copper plumbing was the most popular choice for use in home construction. However, more and more home builders are choosing PEX piping over copper and other materials. Why? What are some of the advantages of using PEX piping?

Advantages and Disadvantages of Copper Plumbing

Traditionally, copper has been the material of choice for use in home plumbing. That’s because copper provided many advantages over other available materials, such as iron or steel. A few of the qualities that made copper piping so popular include:

Despite these advantages, there are also many disadvantages to copper piping. Copper piping is expensive and prone to price fluctuations. Its low tensile strength is why copper pipes are so easily damaged when water freezes within them. Copper also has a low tolerance for acidity and is susceptible to mineral buildup.

Why is PEX Becoming So Popular?

Cross-linked polyethylene or PEX piping has been around since the late 1960s, but it wasn’t until the 1980s that it began appearing in homes and new construction. Builders, plumbers, and homeowners are attracted to PEX for many reasons, including:

Of course, PEX piping isn’t perfect. It may cost more to install and is not recyclable. PEX piping can react with chlorine in the water and is susceptible to damage by UV radiation (sunlight).

While PEX piping is becoming more popular, copper is still a feature in many new homes and buildings. There are many factors to consider when choosing between the two. Consult with a plumbing professional to help determine which type of plumbing is best for your home.

Your First Choice for Professional Plumbing Services in Oceanside, CA

If you need to replace the plumbing in your home, the Oceanside, CA plumbers at 1st Choice Plumbing, Flood & Restoration are here to help. Our team of licensed, highly trained plumbing professionals has extensive experience with both copper and PEX piping. They can advise you on which type of piping is best for your needs and budget. We are here to help you make the most informed choice when it comes to your home’s plumbing.

If you are dealing with a leaking pipe or need to replace some worn-out plumbing contact 1st Choice Plumbing, Flood & Restoration through our website, or call us at 866-437-0205. We’ve been providing outstanding plumbing services to home and business owners in Oceanside, CA, and surrounding communities since 2012.